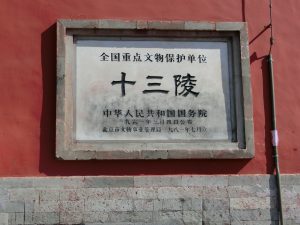 END_OF_DOCUMENT_TOKEN_TO_BE_REPLACED

I lived in Xisanqi, a district in the north of Beijing, between 1994 and 1998. Early on Chinese friends invited us to visit famous sight-seeing spots with us. We went to Badaling to see the Great Wall riding on top the mountain ridges, and in passing we also visited the Sacred Road and the Changling tomb. After seeing so many wonders in one day we hardly realized what we were looking at. One of our friends, Mr. Li, told me the history of the Ming emperors in a few sentences. In Spring 1995 my husband’s company gave us a car, and at the same time both of us received Chinese driving licenses. Having relied on bus and taxi until then, we now looked forward to excursions by car. On a weekend in May 1995 our American friends invited us to a picnic. Driving in a northern direction, the foreign community met in a walled garde; the Germans brought potato salad, the Italians pasta, the French contributed baguettes, the English roast-beef and the Americans burgers. After a pleasant meal I asked for the name of this place. Shisanling, I was told.